Film in South Korea dealt with severe supression after the military coup in 1961 – every script had to go through the Korean CIA to test any pro-communist dogma. Filmmakers would be ruthlessly rejected to the point of imprisonment.After years of dictatorship, in 1990, democracy caused Koreans to protest as their only way of projecting films (through Motion Picture Law) verified to become more minimal and insufficient. They refused to showcase American movies and advertisement until their films would be distributed; the Korean government was determined to grow the industry and so they made it so that Korean films be played in most Korean cinemas. This aggravated America, and so the dispute was settled by an agreement to evenly distribute Korean and American filmography.

This paramount change gave Korean cinema gateway to the world and it is now the 7th largest film market globally and could effortlessly be the new pop-culture sensation. But the only thing more curious than the Korean cinema story lines is its speed in climbing up the ladder of social recognition. So, apart from their manipulative way of gaining global attention, what caused Korean cinema to be so spontaneous in its rise to the attention of the world?

The Wall Street Journal said in an article published on June 17, “It is hard to find popular culture that is as successful as the Korean Wave in the whole world, and there is a KCon at the center.”

But, where does the real source of their popularity lie?

The inauguration of exchange students is a denouement of internationalising education and consolidating students from across the seas for the function of facilitating human intelligence. The assets gained are the conjoining of intelligence and cultural awareness; in order to sustain a vigorous momentum in the ‘moving-forward’ of the world.

Despite being ranked fifth alongside Canada for education quality, Australia is a one of the greater exchange student districts, with 20% of all students being international students. In 2015, 645,185 students enrolled in educational institutions, 272,095 in the higher education sector (2017 results on side photo). Undertaking study with institutions such as VET and ELICOS to commence their pathways.

Mr. Graham Heunis, HSBC head: “Whilst we still attract a large percentage of Chinese students, I think that’s largely driven by our proximity to China. But our education system is not rated quite as high as the UK or the US, for example.”

In depth of this, there is a multitude of inequitable assumptions on international students that have been disregarded and omitted.

The notion of students leaving their home country (to places like Australia, America, and Europe) to “enhance” their education influences major countries to believe that they are of higher-caliber. This is inaccurate and prejudiced as sources prevail to demonstrate that an excessive number of asian universities acquire higher ratings in science, maths and reading.

more than $42,000 each year on fees and supporting themselves, yet they are hindered with further charges that are not inconvenienced to local students, such as concession fees. Additionally, the Federal Government also does not have an effective policy or legislation to prevent universities from “charging international students more than they’re already charging.”

A lofty amount of Korean teenage middle-aged students studying abroad are having difficulties as they still require a mother’s hand and living alone is a concern – some of them are sent overseas to live in relatives homes’ or homes of people the family knows but most are sent to foreign borders’ residences. Additionally, they are not given easy access to return to their country if they require the calmness of home to cure their homesickness.

A situation occurred in which a third grade student was found crying in a church because his father was in Korea and this is evidence that no matter how good US study is, a question ponders – can we throw away children to face the scary world alone, at this age?

Similarly, the Los Angeles Unified School District found three underage Korean students sharing an apartment without adult supervision. The school soon called the parents in Korea and told them to take the children back home.

A survey on international students in an Australian university shows that they feel comfortable and safe but do very much miss the way of life in their birth country and find it hard to be away from people they love. 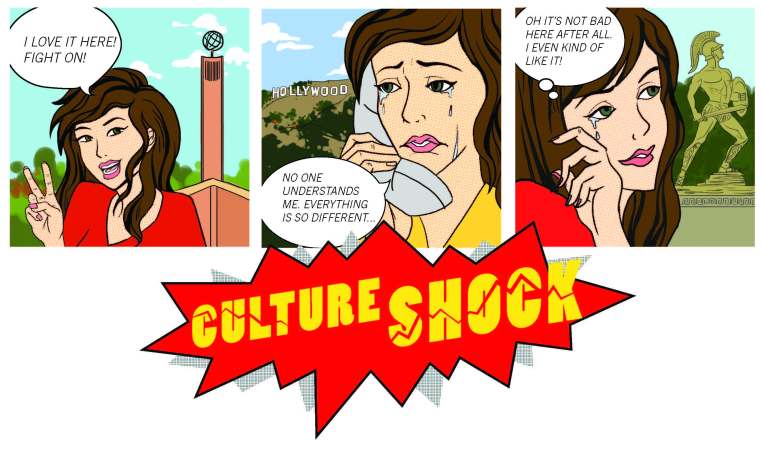 As all other global interactions, the obligation to understand each other’s cultures and traditions is a fundamental notion. Despite their eagerness to disregard their old ways in order to interact with residents, the residents refuse to express interest toward the exchange students and more often than not, question and discriminate them for their traditional practices.

This is an issue that incites culture shock. To impede this, local students should approach various ethnicities with a kindness that may or may not help international students have a better experience in studying abroad; learning their cultures or contributing to equal rights.

Globalisation has seen a significantly gradual and monumental amelio

ration due to the modern use of technology – the approachable nature of the Internet and it’s following social media networks. Whereas legacy media era’s communication was onerous, the revolution of extensive open access media has allowed entities immediate access to information – to receive and bestow. Subsequently, news transits more rapidly than you can say ‘FAHRVERNUGEN’. However, with the reaping of beneficial conveniences, there are consequential drawbacks.

One of those drawbacks are mass media outlets that may put an impression/belief into the public’s head by giving a biased attitude on a story (the way Trump does; fake news). Once a few claims on a certain theory have been made, free media authorizes people with Internet access all over the world to become journalists; giving in their often baseless evidences in order to reinforce or further corroborate the claim.

A major contextual concern of mass media is the prejudicing of an ethnic group to be of a lower status than others. Alongside other ethnic group bigotries, such as the deficiency in freedom of choice given to black people (#blm) and inadequacy of approving dual citizenship, the discrimination against Muslims is a trending controversy  – labelling them as terrorists. This claim was first and fore mostly a result of the 9/11 incident.

The chauvinism instigates so much fury amongst the Muslims and their impotence to substantiate their actual worth is desolating. We watch the world indict people as terrorists by cause of their choice of religion. There are abundant rationalizations for this, such as the fear of America’s majority (Christians) cultural dominance being threatened despite the reality of the existing Arab-Americans.

Times when people were robbed of their free-will because they were Islamic:

1. At a NY Giants football game, a cluster of Islamic Americans were pulled aside by 10 security officers and meticulously observed after they left their seats to pray, evidently being reallocated seats near three guards.

“I’m as American as apple pie and I’m sitting there and now I’m made to feel like I’m an outsider, for no reason other than I have a long beard or that I prayed,” said Sami Shaban, a 27-year-old Seton Hall Law School student who lives in Piscataway.

2. Muslim teenager from Irving, Texas, Ahmed Mohamed’s teacher heinously put him into custody; allegedly filed the clock he made from a pencil case to be a bomb. This was a scandalous con

troversy as it invoked many social media reactions, from Barack Obama to Facebook owner, Mark Zuckerberg. Despite many protests and the obvious innocence of the future engineer, he was still sentenced to suspension because ‘a child should not bring something like that to school.’ (#EngineersForAhmed/#IStandWithAhmed)

“They arrested me and they told me that I committed the crime of a hoax bomb, a fake bomb,” the freshman later explained to WFAA after authorities released him.

3. Notwithstanding the restriction already placed on government agencies an

d state-run schools, the prohibition on hijabs in France is expanding to universities as requested by the Supreme Council for Integration. They state that it was paramount in order to waive quixotic requests made by Islamic groups in universities – such as demanding a praying region and special menus. These kind of alterations result in the alienation of the five million Muslims in the country.

(“Separation between church and state can not be reduced as some want to have an arsenal of laws against Muslims.”)

Pages, T. (2017). The Most Significant Racial/Ethnic Issue of the Decade – The Color Line. [online] Thesocietypages.org. Available at: https://thesocietypages.org/colorline/2010/12/20/the-most-significant-racialethnic-issue-of-the-decade/ [Accessed 4 Aug. 2017].