PSA: ‘soju+shouju was a blog post on live action adaptions of anime. Here’s a short video of such a concept.

‘Soju+soujo’ was possibly written through a narrative yet reflexive auto-ethnographic lens. My post was reflexive in that it became a diagnosis of more than just me, but also a phase of history and its influence on me. [Spender, cited in Denzin. 2003.]

Charmaz (1983) stated that layered accounts display “data collection and analysis proceed simultaneously”. They bring in the notion of approaching a topic as a “source of questions and comparisons”. [Charmaz, cited by Ellis et all. 2011] So, I argue that the ‘soju+shouju’ piece of ametuer literature may additionally be classified as a start to a layered account auto-ethnography as it presents a simultaneous report of data processing and research, whilst teaming up with the concept of analysing both the data and how I stray away from my original course of life due to the flourishing knowledge of and grasp on the new culture.

Subtracting from my ponderings, I retrace my perception of auto-ethnography 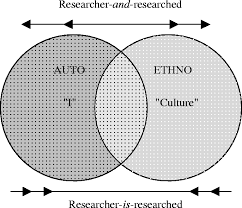 back to the discovery of the iridescent parallel in the concept that auto=me/I, and ethno=culture. Additionally, the ‘dividing line between auto-ethnography and ethnography (essentially) disappears’ and an auto-ethnographer should be a guiding presence in their texts. [Denzin, 2003] This middle ground is a followthrough of revelations/realisations and the changes made to my being after being affected by the new culture. These changes are evident in terms of my possessing a new, filtered, pair of eyes that see the world differently and furthermore, respond to my past differently. This reflects Ellis et al’s (2011) argument that ‘autobiographers write about “epiphanies”—remembered moments perceived to have significantly impacted the trajectory of a person’s life’. I’ve presented my own personalised narration of my epiphany with the mention of the new desires I had, once I was exposed to their existence in a culture outside of my own (such as having a soft and ‘flowery’ romantic relationship). To also recognise that I’m an asian female meant that I was ‘self-aware. A query that aligns intentionality with self-reflexivity and authenticity.’ [Dubrovsky and Wood, 2014]

With this in consideration, many might argue that the removal of any kind of epiphany as a result of exposure to a foreign culture, may actually(!) strip us bare of our identity. The epiphanies that I have unknowingly made, from cultures that I was introduced to growing up, have whole fully created the open-minded and diverse person that I believe myself to be now.

However, I must confess a new untasteful apprehension toward my auto-ethnographic studies in the future that present itself in the need to redirect myself and begin a commitment to use ‘theoretical and methodological tools and (allow myself access to) research literature.’ [Allen, cited in Ellis et al. 2011] I will additionally need to adjust my auto-ethnographic spectacles so that they prioritise the broader consensus on a culture. I’ll clothe my texts in such a way that may ‘lead way to a radical social change.’ [Denzin, 2003] With that, I will begin a narrative that discusses the distinctions inside a culture – observing both the stereotypes from outsiders and the true phenomenon.